Summary: How to navigate over XML documents with reusable XPath expressions, including ones with namespaces.

Along with JSON Pointers, presented recently, all the features in the post will be released in Zato 2.0, which is currently in development on GitHub.

XPath expressions and XML namespaces can be defined once and reused in many services using the web admin GUI, API or enmasse. For instance, here are definitions needed to map identifiers between hypothetical ERP and CRM systems.

And that's how a sample service may look like - notice that response is an empty document initially and all the required elements are created on fly, including placing them in namespaces defined in the GUI.

As always - that very code can be hot-deployed onto a cluster and re-configured on fly. Should any updates be needed to XPath expressions or namespaces used, no code changes will have to be performed - such a service is purely configuration-driven and can be exposed over multiple channels, such as HTTP, AMQP, ZeroMQ or JMS WebSphere MQ.

JSON Pointer syntax, as defined in RFC 6901 offers means to navigate through JSON documents /using/paths/in/documents - here's how to make use of them in the upcoming version 2.0 of Zato.

Systems being integrated will usually offer standard ways to refer to certain objects transfered in JSON documents. For instance, a customer ID will almost always be in the same location across documents no matter the actual API call.

We can take advantage of it and define a set of reusable JSON Pointers that will be referred to in body of multiple services. They will be R in IRA of Interesting, Reusable and Atomic APIs one should strive to design.

Here come the definitions and the net result..

.. and the discussion of what has been presented:

JSON Pointers can be freely reused in more than one service - and should one day an ERP or CRM above decide to change their data model only the JSON Pointer's definition will have to be updated, with no code changes to the services necessary.

Note that the very same API is also available for XPath expressions, presented in a companion post.

Article presenting a scalable integration pattern utilizing OpenStack Swift connections, a feature to be released in Zato 2.0, to connect independent applications in an asynchronous manner.

Let's say your application receives invoices that need to be distributed to multiple target applications using a cloud storage.

It doesn't matter how many input channel there are, how many receivers there will be or what the transport protocol and data format are - the approach needs to be generic and re-usable.

Here's how one would tackle it in Python with Zato ESB and app server.

First using the web-admin, a connection to OpenStack needs to be defined. This particular one uses Rackspace but any OpenStack provider will do. 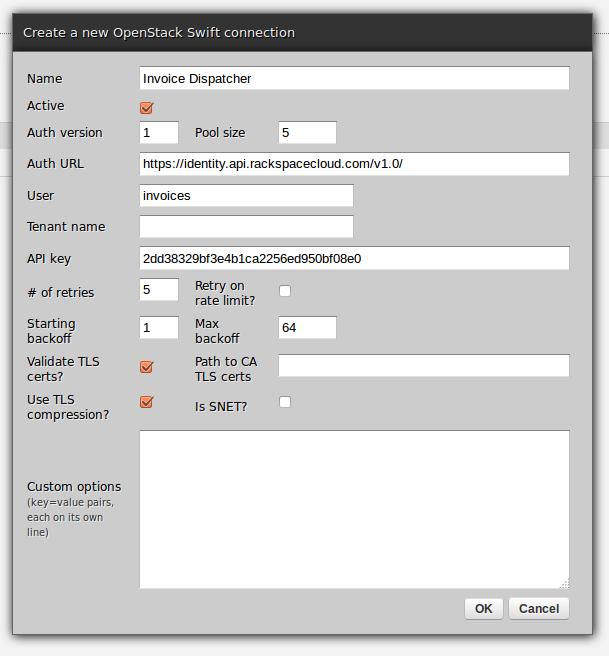 Note that filling out a form suffices for a pool of clients to be created and made available on all nodes of a Zato cluster, as confirmed in server logs.

Next you need to hot-deploy a service, such as the one below.

Note the use of SimpleIO - this is a declarative syntax for expressing requests and responses independent of how the data is transported, in query string parameters, JSON, XML or SOAP.

This service expects a list of elements called 'target' to be provided on input. In the article, the list will be produced using the query string but it could have been any other source as well and the service wouldn't care as long as they were available on input.

Once a service has been deployed a JSON channel is needed, again filling out a form is enough. 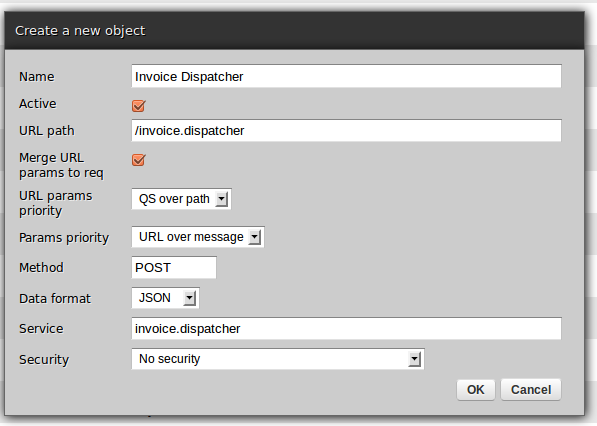 And that's it. That's the whole of it. You can now invoke the service over HTTP with JSON/XML/SOAP, AMQP, ZeroMQ or perhaps WebSphere MQ, including JMS.

The trick is - no code changes would have been ever required, the same service can handle multiple channels or target applications without ever touching the code. Everything is a matter of configuration and the service itself is re-usable in many contexts (R in IRA of Interesting, Reusable and Atomic).

Likewise, if one day you decide to change the OpenStack provider no code changes will be needed - filling out a form with new credentials would be enough. The changes will propagate throughout the whole cluster with no restarts, unless your deployment methodology needs them.

For clarity's sake, curl will now be used to invoke the newly deployed service but the same would have been achieved if say, AMQP with XML had been used instead of curl with JSON ..

.. and the result in OpenStack-based Rackspace Cloud Files is ..

Regardless of the config method, no restarts are required unless you need them - everything can be always reconfigured on fly.

The next instalment will cover the other side of the story - means to receive requests over cloud connections sent by other applications connecting to Zato-based solutions.

Check out the command line snippet and screenshot below - as of recent git master versions on GitHub it's possible to use MySQL as a Zato's SQL Operational Database. This is in addition to previously supported databases - PostgreSQL and Oracle DB.

The command shown was taken straight from the tutorial - the only difference is that MySQL has been used instead of PostgreSQL. 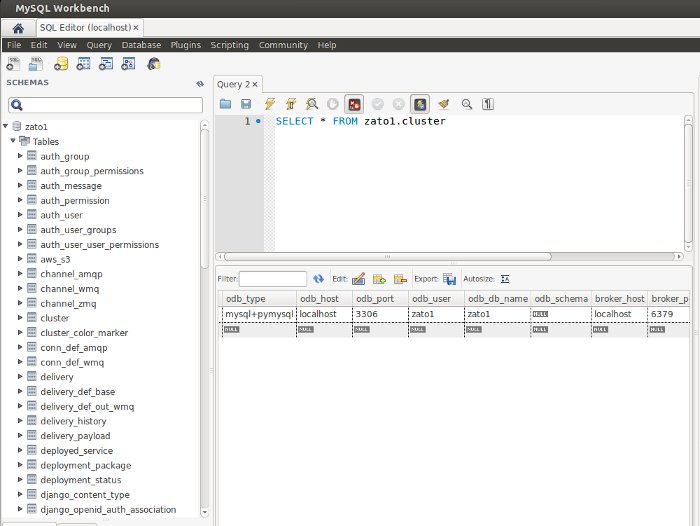 A newly added Zato feature lets one update HTTP timeouts on fly, without any redeployments.

It's been always possible to provide a timeout a given HTTP connection should be capped to. However, changing the value required either redeploying a service or storing it in an external store, such as Redis, that was queried each time a request was made. While being very lightweight, these operations still were something to remember about.

Thus recent GitHub versions allow one to update the value on fly, with no deployments or any restarts. It works with JSON, SOAP (both Suds and string-based) or any other HTTP connection established.

The feature will be released in Zato 2.0 but it's already available in git master.