Why and when to use WebSockets?

Zato WebSockets channels are an attractive counterpart to REST-based APIs. Their main characteristics are: 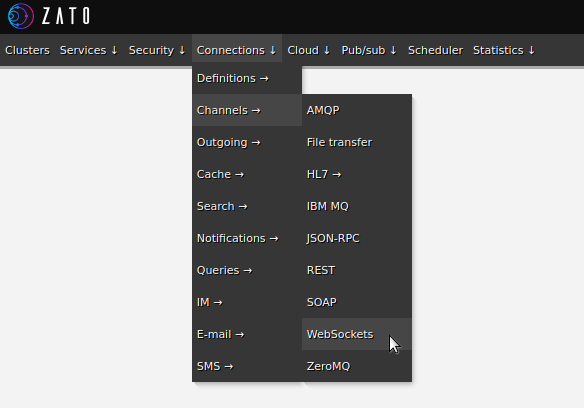 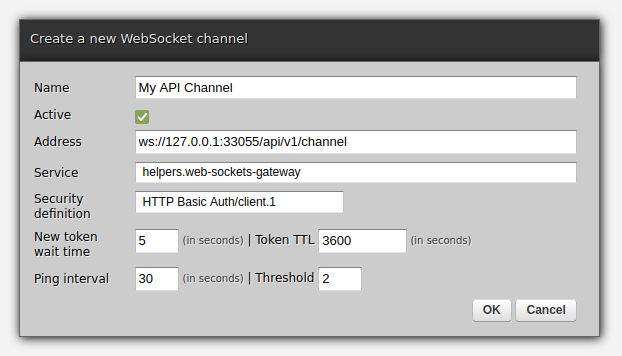 Zato offers a dedicated client for WebSocket services that hides all the low-level details under a familiar API, as below:

WebSocket channels created in Dashboard are programming language-agnostic, which means that they may be used to invoke services and publish or receive messages from any application that speaks WebSockets and JSON, e.g. Python, JavaScript or any other.

To utilize WebSocket channels, applications (API clients) need to follow a protocol described in this chapter.

Connecting, and obtaining a session token

Clients establish an initial WebSocket connection to the address a given channel utilizes, possibly taking into account the fact that there may be a load-balancer performing URL transformations or port mappings in front of Zato servers.

Once a connection is created, clients need to create a session and receive a session token. This step needs to be done even if for a given WebSocket channel no client credentials are needed.

Clients must use the session token in all requests over the same TCP connection. The token cannot be used any other connections, it is specific to one TCP stream.

Right after a TCP connection is established, before logging in, an information entry is stored in server logs. This includes data about from what IP address and domain name the connection comes from as well as the address and name of the WebSocket channel.

If a client connects but does not initiate the create-session request within the expected time, the TCP connection will be closed with an accompanying warning message in server logs:

Otherwise, if the client creates a session successfully, an informational message will be saved to logs:

Clients with a session token can invoke the service that is mounted on a WebSocket channel they are connected to.

It means that if a client wants to invoke multiple services, the service from the channel needs to forward messages to the actual ones using self.invoke and send the response back to the calling client by assigning it to self.response.payload. That allows one to implement white-lists where only selected services can be made accessible to the caller and attempts to invoke any other one will be rejected.

There is also a default WebSockets gateway service that can be used to invoke any service, it is documented in this chapter below.

This sample assumes that service zato.helpers.echo is mounted on the channel - it is a built-in service that echoes back everything in receives on input.

Again, the sample shows what zato.helpers.echo may return if it is assigned to a WebSocket channel.

Closing sessions and logging out

There is no separate API call to close a session and log out. It suffices to close the WebSocket connection along with its TCP stream - this will be immediately recognized by Zato and all the relevant shutdown and cleanup actions will be performed.

Afterwards, the session token cannot be used anymore even by the same client; a new session needs to be created with its own token instead.

A built-in service called helpers.web-sockets-gateway can be mounted on a WebSocket channel to make it possible for clients to invoke any other arbitrary service.

Note, however, that clients will truly have access to any service deployed on the server they will connect to, including all the internal ones. If this is not desirable, the gateway service can be subclassed to implement a white-listing logic, i.e. to filter out requests that attempt to invoke a service outside of the list of permitted ones.