IP rate-limiting and white-listing enables one to restrict access to Zato objects based on two sets of conditions:

It is possible to express scenarios of varying complexity, such as the simple one below:

Or a more intricate one, such as this:

Rate-limiting definitions can be attached to several kinds of objects, each of which is checked in run-time in the order described below:

Note that while the order of checks is fixed, all of these steps are optional and if a particular object does not have any definition, or if it is not enabled, it will not be checked at all.

A definition for each type of object possible is always of the same format:

For instance, below is a sample definition for a service object - all the other object types follow the same style: 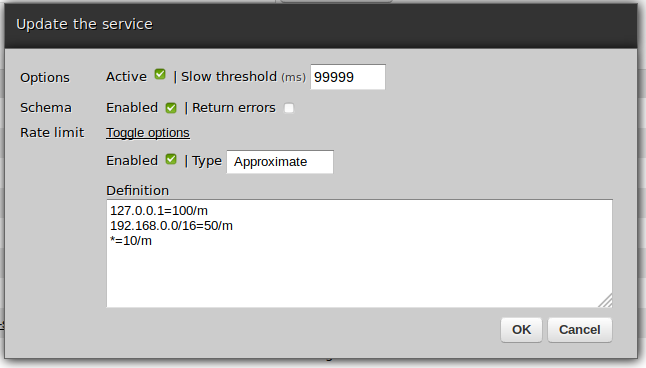 With the exception of SSO users, definitions may be of two types: exact or approximate ones.

Note that SSO users always use exact definitions, it is not possible to change it to an approximate one.

Processing stops as soon as the first matching rule is found. If no rule matches, the request is rejected.

Note that it is possible to create empty rules, that is, without any lines to match at all. This will indiscriminately reject all requests.

Each line is in the format of source = limit. Whitespace around the equals sign is ignored.

Source may be one of:

Any part of a rate-limiting definition can be changed at any time, e.g. limits may be freely changed whenever it is required.

Each time a definition is changed its internal hit counter is reset - for instance:

The only change that does not reset the counter is modifying the "Is active" flag - toggling the definition's state between active or inactive, no matter how many times, does not reset its hit counter.

No matter the source address, this object may be accessed at most one thousand times a day:

Users from the first network block may access the object a hundred times a minute whereas the ones from another block only five times a day:

Some addresses networks will have limits but for localhost there will be no limits:

No limits all, no matter the source address: