This guide presents information helping in designing and installing the right kind of a production Zato environment - one that meets the demands of a system capable of supporting a wide range of business processes in a manner that is efficient and effective.

The initial questions that an architect designing a Zato environment has to answer are:

The rest of this document assumes that you have answers to the aforementioned questions because it is these questions that the concrete, technical decisions outlined below will follow from.

Deployment to production should be a formality only

It means that a minimum of environments that you need to create is two, one for the actual production needs and at least one other environment. If there are only two environments, it is up to you to decide whether the one that the one that development and testing were conducted in become production or if production is created separately.

Whether to use two, three or more environments in addition to production will depend on a particular business and technical situation - in some cases there will separate development environments for each developer independently, or separate integration, user acceptance (UAT) and testing or pre-production and mirror environments.

Plan to automate your configuration and deployments and consistently use the same automation tools in different environments. Again, the expected end result is that a production environment, as important as it is, should be simply the same set of tools and procedures, parameterized differently, e.g. pointing to different databases or resources.

Processes involving mainly work with small, short requests and immediate responses based on input from users are termed online transactions whereas work such as daily processing of invoices or customer orders using file transfer are batch processing.

Both types of processes will inherently compete for server CPUs and RAM. E.g. a nightly job to process large files downloaded from SFTP may completely saturate several CPUs and many GBs of RAM. During that time, processes involved in online transactions will not have access to these server resources.

Hence, some mixing of the two types of transactions in one environment may be usually acceptable but, as a rule, if you design a high-performance online transactions processing environment, do not use it for batch processing or the other way around. Instead, create two or more Zato clusters, each for the specific types of processes. Then, your production environment will consist or two or more Zato clusters - it is perfectly natural to have one environment composed of more than one cluster. If needed, they can communicate using WebSockets, REST or other protocols.

The resulting cluster is exactly the same as if one were to use set up all the individual components on one's own except that it is already pre-configured and ready to use which means that there is no need for you to do it on your own, rather, create a quickstart cluster whenever possible to save time.

Quickstart clusters are also available via Docker quickstart containers which let you configure cluster via environment variables and enmasse files. They are a convenient way of setting up new environments that do not require uninterrupted HA (High Availability).

HA - if downtime can be accepted

Downtime is never a pleasant state and most environments would like to avoid it. At the same time, many sites would not like to invest too much time into preventing it because there may be no tangible return from such an investment of time and resources.

For instance, if the business nature of processes dictates that they run once a day, once a month or at intervals that are wide enough for semi-automated or manual tasks to be conducted, there may exist a natural tendency not to prefer to design and maintain a full HA environment.

In such cases, do consider the usage of quickstart clusters first, possibly running Zato under a Docker quickstart container, and monitor its availability using a tool external to the environment.

This monitoring tool may be a ping REST request to /zato/ping or anything more site-specific, e.g. you can have the built-in scheduler trigger a new task of pinging an external monitoring server once a minute.

In this manner, should the environment become unavailable for any reason, its replacement can be brought up very quickly. It is up to you to decide in a given context whether bringing up a environment should be fully automated, i.e. whether the lack of a response to a monitoring event should trigger a rebuild automatically or should the rebuild be manually triggered.

Regardless of how the rebuild is triggered, if using quickstart clusters and zato enmasse, it should not take more than a few minutes for a new environment to become available.

HA - if non-stop availability is required

If full HA, with no downtime, is required, you need to ensure that there is always at least one server available to accept and process requests. There are two major avenues for achieving it: 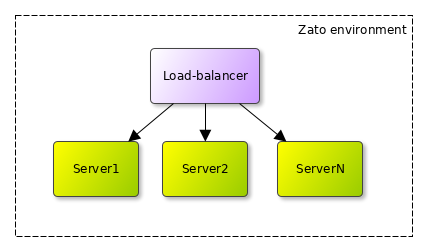 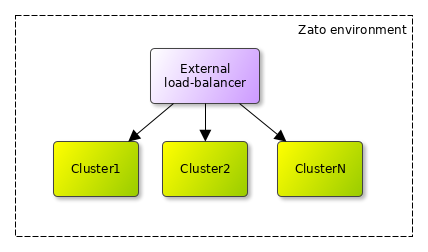 Zato environments can be scaled by adding new servers, new CPUs to existing servers, or both. In either case, the result is the same - more CPUs available for message processing.

However, one of the pillars of cloud computing is that environments should scale via the addition of relatively small, inexpensive computers. In turn, it means that Zato servers should not have more than 4 CPUs assigned for main processes. 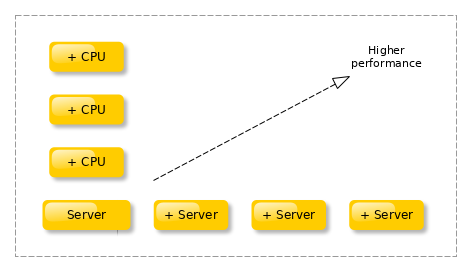 Choice of the operating system

Production environments must use Linux systems. All systems should be the same, i.e. consistently use Ubuntu at the same version and patch level everywhere in the environment.

Windows systems can be used for development but they are not supported as production environments.

While Zato servers are fast and light on resources, in a general overview such as this one, it is not possible to specifically foresee how much RAM and CPUs will be needed by a particular solution or environment. In one instance it may be one small CPU, in another it may be many bigger CPUs - this kind of estimations can be produced only during performance testing specific to a particular workload.

The only default value that can be estimated is that of the disk space needed for production purposes:

Do not use more than 10 connections in a single Oracle DB pool, otherwise the underlying Oracle DB SQL library may begin to return error KPEDBG_HDL_PUSH_FCPTRMAX which will automatically restart the main server process, breaking any already requests that are in progress.

If you use WebSocket connections, each server may use 1 CPU. As with publish/subscribe, scale such environments by adding more servers rather than by adding more CPUs.