What ESB and SOA are anyway

The ESB acronym and a related one - SOA - can be a source of confusion. ESB expands to an Enterprise Service Bus. SOA stands for Service Oriented Architecture.

That still doesn't explain too much so here's more information in plain English, without too much of corporate speak.

Think what happens when you log into your bank's frontend application:

Now, it's very likely that all these pieces belong to different systems and applications, each of which exposes data through an interface of some sort (REST, JSON, AMQP, Kafka, SOAP, FTP, CSV, doesn't really matter):

The question now is, how do you make the frontend app talk to 1-5? Well, you don't.

This is the fundamental basis of making sure such environments can scale above a handful of systems. You don't let them talk to each other directly.

In the diagram below, each invocation of a service another system offers is represented in a line of different width or style: 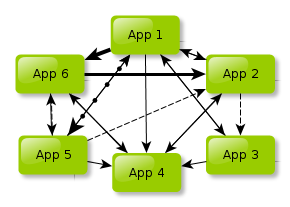 Note that we didn't even show you any higher-level processes (App1 invokes App2 and either App3 or App5 depending on whether an earlier response from App 6 was successful so that App4 can at a later time grab data produced by App 2 but only if App 1 doesn't forbid it etc.).

Also note that we're not talking about servers - each of the systems may run on 10 physical servers so there will be at least 60 physical components talking to each other.

How to separate interfaces? How can you plan roll-outs? How do you coordinate updates or planned downtimes if each application is managed by different teams, vendors or departments and half of the original developers have left already?

If you think you can handle 6 applications, how about 30 of them? 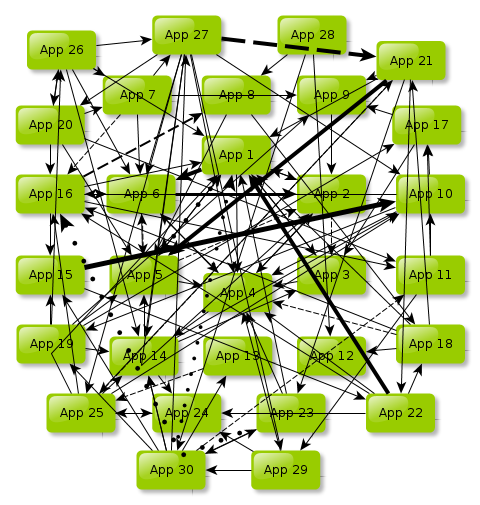 Can you deal with 400? How about 2000? Each application can be a unique ecosystem requiring 10 servers or other devices to run on, so this is 20k moving parts spread over continents and all sort of technical or cultural boundaries, all that parts constantly and incessantly wishing to exchange messages and to chatter with each other all the time without any let-up, ever. (We’ll spare you a diagram)

There's a good name for that situation. It's called a mess.

How can you clean up the mess?

First thing is to honestly admit that the situation has gotten out of hand. This allows one to look for a remedy without feeling too much guilt. OK, it happened, you didn't know any better, but there's a chance it can be cleaned up.

This may mean an organizational change in an approach to IT but another step is to recall that systems and applications are not created merely to push data around. They're meant to support business processes, regardless of what your business is, banking, audio recordings, radio devices, anything.

Once you got these two clearly stated you can start thinking of building or redesigning your systems around services.

A service is something interesting, reusable and atomic that is offered by one system to other applications willing to make a good use of it, but it's never exposed directly in a point-to-point manner. This is the shortest meaningful definition possible.

If a given functionality of a system fulfills these 3 requirements, that is, if it's:

then there's a very good chance it could and should be exposed as a service to other systems, though never directly.

Let's discuss this IRA approach through a couple of examples.

If you've done any programming in the last 50 or so years it is now very clear that exposing a service is precisely like exposing an API in one part of code to another. The only difference is that you're not dealing with sub-modules of a single system, you're operating on a level of an entire environment of disparate systems.

Making services available on an ESB in an SOA

Now that you know that systems don't exchange information directly and you understand what a service is, you can start making use of an ESB. 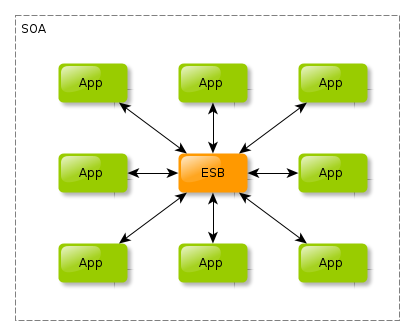 It now becomes the job of ESB to expose and invoke services of the integrated systems. That way, in most cases, only one access method, one interface, needs to be defined between each system and the ESB.

So if, like in the diagram above, you have 8 systems, there will be 16 interfaces (one in each direction) to create, maintain, manage and take care of.

Without an ESB you'd have 56 interfaces to think of and deal with (assuming each systems system talks with each other).

40 interfaces less means less time wasted and more money saved. That's one of the reasons why your Fridays will be less strained.

This fact alone should make you strongly consider introducing an ESB.

If a system undergoes a rewrite, change of ownership, gets split between departments or vendors, it will be a duty of ESB folk to conform with the change. None of the other systems will even notice it because their interface with ESB will be left intact.

When you start breathe IRA services on a daily basis you can begin to think of composite ones.

Remember the 'give-me-everything-you-can-about-that-customer' kind of service above?

It wasn't a good idea to create it but you will sometimes have to deal with client applications that need aggregated and summarized information. It will be ESB people who will be responsible for picking the best atomic services to build a composite one for that particular client system requiring this particular set of composite data.

With time the whole organization will begin to understand that it's no more about database tables, files, batches, functions, routines or records. This will be about an architecture centered on interesting, reusable and atomic services applications offer to ESB.

No longer will people think that applications and system send things over one to another. They will see ESB as a universal access gate to interesting services their own systems can make use of. And they won't even bother with checking who exactly provides what, their systems will only deal with ESB.

It takes time, patience and coordinated effort but it is doable.

But watch out for...

The best way to ruin the whole concept of SOA is to roll out an ESB and expect that matters will smooth out themselves. While still being a terrific idea, simply installing an ESB won't achieve that much, unfortunately.

In the best case, sweeping something under the carpet, like in the diagram below, will achieve nothing. 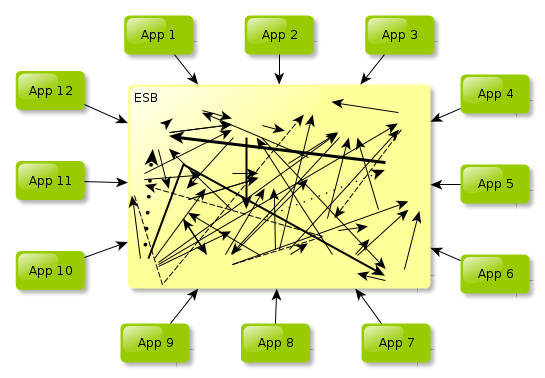 Your IT people will loathe the system and the management will first tolerate an ESB as a new kid on the block but later on it will become a laughing stock. "What, that new silver bullet? Hahaha".

Such consequences are inevitable if an ESB is not part of a bigger plan of actually moving things forward.

An ESB is for banks and similar only, then?

Not at all, no. It is a good choice in any situation requiring multiple data sources and multiple access methods to co-operate in order to achieve an interesting result.

For instance, grabbing latest readings from thermal sensors and publishing it into several channels, like e-mail alerts and an IPhone app does sound like a good fit for an integration platform.

Periodically consulting and monitoring whether all instances of a critical application are all up and if any is not, running a pre-configured script while sending a text message to admins also sounds just fine.

Everything that needs integration in a clear, well-defined environment is possibly a good fit for an ESB service but as always, deciding whether something really is a dream fit will follow from one's experience. Naturally, Zato's authors can help.

But I heard SOA was all about XML, SOAP and web services

Yes, this is what certain people would like you to believe.

If people or vendors you worked with did things such as BASE64-encoding a CSV file and sending it over to you in a SAML2-secured SOAP message then it's quite understandable how you might've developed such an impression.

XML, SOAP and web services have their uses but like anything, they can be misused.

SOA is about a clean and manageable architecture. That a particular service might use SOAP or not is pretty much irrelevant. As an architectural approach, SOA will still be valid even if no SOAP service will be used at all.

If an architect designs a beautiful building, they can't really do much about the color of the paint people choose for the interiors.

So no, SOA is not much about XML, SOAP and web services. These can be used too but it's not the whole story behind it.

You are encouraged to kindly direct your strayed colleagues to this article to make them understand what SOA really is about.

This chapter covers only the very basics but should still give you a strong understanding how ESB and SOA should look like and what is needed to achieve a success.

Other topics, not covered here, include, but are not limited to:

So what is Zato exactly?

Zato is an ESB and application server written in Python and can be used for building middleware and backend systems. It is open-source software with commercial and community support available. And Python is a programming language famous for its ease of use and productivity.

Using Python and Zato means you are more productive and need to spend less time on nuisances.

Zato was written by pragmatists for pragmatists. It's not yet another system quickly stitched together by a vendor on the wave of ESB/SOA hype.

In fact, it was born out of practical experience in putting out fires caused by such systems. Indeed, Zato authors spent so much time on dealing with such horror environments that they became virtually immune to any fires.

This is the forge out of which Zato came into existence and that's why it can offer productivity and ease of use unparalleled by other seemingly similar solutions.